Every year we hear some wild and out of this world wedding day stories from vendors around the globe. Many diverse personalities float around one another and with the right combination the unknown can happen. To help give you a laugh and a wedding planning break, we have compiled below some of our favorites.

Disclaimer: The views, information, wedding day stories, or opinions below are solely those of individuals and do not represent those of “A Nomadic Love”. They also may contain strong language (which may be unsuitable for children).

I work as an event planner. It was the wedding of two fairly wealthy families, and the bride had decided on a rather rural, “shabby chic” aesthetic. The reception, she decided, would take place on family property, in a historic barn. This caused a huge flurry of issues, between having to have the barn cleaned, the fact that we needed auxiliary tents as the barn wasn’t large enough, and the fact that the property lacked electricity and running water. The latter was solved with a bank of generators, tubs of water for catering, and a side tent with porta-johns hidden inside. The bride had, to be honest, been quite a bridezilla, but it’s my job to deal with those things.

At this point, the ceremony is over, cocktail hour is shutting down, professional photos are going on. We were prepping to transition to the entrance of the bridal party, which would be followed immediately by first dance and cake cutting. During this, the dinner would be staged, so every aspect was being fairly carefully timed out. I was speaking to the caterer when I happened to glance over and see the most curious blend of expressions pass over the brides face, and she frantically waved down my assistant.

A few moments later, my headset beeped on, and my assistant said “we have an issue”. It turns out that the bride had gambled on a fart and lost in a big way. Now, the bride was wearing a huge, full ball gown, with a fitted, bones strapless top in a sort of embellished mesh. Underneath, she had a shaper garment and hoops and slips. We had already realized there was zero way of her going to the bathroom: we had issues getting her into a limo, and having her use a porta-johns meant one of us would have to get personal. That was my assistants job. I radioed to everyone to expect a fifteen minute delay, and they headed towards the tent.

The fifteen minutes pass. Then twenty. Finally, my earpiece beeps on. “The previous issue is more than we anticipated.” I ran over to find my assistant looking horrified. The bride, it turns out, has been using some health shakes in an attempt to fix last minute bloating. This had mixed poorly with the cocktails from earlier, and she had eaten a fairly decent breakfast.

The substance that had come out of her body as a result defied explanation. It was slimy, oily even, with stringy bits and the consistency of hair gel. Not only had it been a rather profound accident, but the smell was unrivaled. Generally, a substance no human body should emit. But the thing that set it over the edge was that the shaper the bride wore was a latex deal that came down over the thighs and up to her bra. Waterproof, the poo had just sort of filled it, like a water balloon of horror. My assistant had opened up the snap crotch and just released the evil trickling down the brides thighs. My assistant quickly sealed it back up and she and the bride vainly tried to wipe up the goo, dry, with toilet paper. This just spread it around, so they decide to give up.

Now I have a shell shocked assistant and a crying bride. You can smell her four feet away. The bride is just flipping out that she’s making her guests wait, that she has a choreographed dance waiting to happen, and she needs to be introduced NOW. I’m just looking at her manicured nails. Residue of diarrhea is embedded into her nail bed. I start trying to scrape the poo out with a fabric stain wipe, while the bride insists that the show must go on, immediately. I give in that this is an issue which will have to wait, and signal to start introductions. The groom looks vaguely disconcerted by his new wife’s odor, but I tell my assistant to distract him until they take the floor. Introductions happen, the dance starts, and we find some fresh horror.

The dance was a choreographed affair, and as the groom spun his bride around, hand on her waist, he is squishing the poo up the insides of the waist trainer, up and out the back waistband. To our horror, we watch as a oily stain spread across the mid back of the gown. As we are still cringing from this, the groom sets his hand firmly in the middle of the poo stain. Action had to be taken as soon as the couple left the dance floor, it was obvious, and I left my assistant in charge while I made preparations. She kept radioing me: the stain was spreading, she could smell the poo from her spot by the DJ. They were cutting the cake now. They were feeding the cake to each other, both now with shit stained fingers. Each was looking downright repulsed.

As they left the dance floor, I had someone rush wet naps to the groom and to bring me the bride. The support tent was closed down for me, and I pulled a tub of clean water from the caterers. She walked in to find me in dish gloves and a poncho, like American Psycho, for five minutes, I was sponging down a sobbing, naked bride, while I questioned every life decision that lead to this point. The diarrhea was everywhere, spread in a thin layer across her body. It may be the most disgusting thing I’ve ever dealt with. With her clean, I threw away the waist shaper, and scrubbed down the $15 k wedding gown back in a plastic basin. The inner lining was a loss, and I cut it out completely.

Dressed again, the bride was little worse for wear, except for missing her dinner. The support tent smelled like a sewer and just was closed for the remainder of the event. The groom was a sport, never directly saying anything, but asking if we could cancel the garter toss as he didn’t really want to go under her skirt. Pictures from the event appeared in a magazine. Still photos, away from the smell, were beautiful.

Father of the Groom

The father of the groom passed away two weeks before the wedding and left a letter to be read during the reception, where he proceeded to tell his sisters from the grave that they were ugly motherf***ers. The only two people not laughing were the sisters. ?

Once I witnessed the groom carrying his bride in a wheelbarrow so she can sell toilet paper to guests. It’s a way for the couple to get money for their honeymoon, but it was super awkward. Especially because they had already done a donation dance. ??‍♀️

Seagulls were swooping to attack a woman who was singing very badly at a beach wedding. They kept swooping and pecking till one stole her sheet music and ended the song.

A pigeon nesting in a priest’s head. The church goes silent trying to hold back the laughter.

At a wedding, we were doing make-up as the wedding planner’s dog took a sh** in front of the bride in the bridal suite. She picked it up with her bare hands and launched it out the open window at the other end. Then she acted like it never happened and carried on arranging things in the room.

Now that you have had a good laugh at these wedding day stories it’s time for you to get back into the planning stages. No wedding is perfect so enjoy the process and don’t forget to laugh a little! Life throws a lot of curve balls, so don’t take it too seriously.

Want more wedding day stories? Comment below! Also be sure to head over to our Free Resources section for more articles! 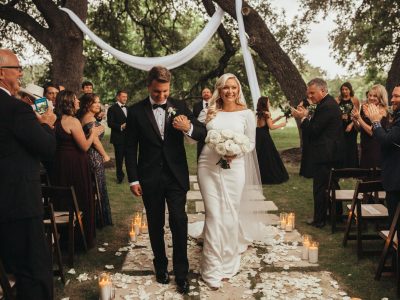 How to Find the Right Vendors for Your Wedding Day. 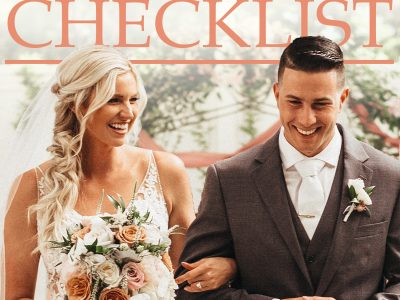 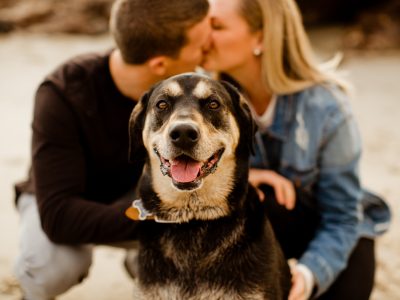 Including Your Dog in Your Engagement Photos

Prev Including Your Dog in Your Engagement Photos
Next How to Find the Right Vendors for Your Wedding Day.